Jennifer Game is the Pauline Hanson's #OneNationAus candidate for Mawson at the South Australian state election. Highly experienced, Jennifer is One Nation's SA leader, a mother, a grandmother, a tax law expert, and has an honours degree in earth sciences

Jennifer Game is the leader of Pauline Hanson’s One Nation in South Australia and is contesting the 2022 state election in the seat of Mawson.

Jennifer offers a wealth of experience and expertise to the people of Mawson. She’s an expert in tax law, having worked at both a legal firm and the Australian Taxation Office. She worked at a genetics laboratory after achieving an honours degree in earth sciences. She was a director of the Australian War Memorial after a stint at the State Library of Victoria.

Jennifer is a mother and grandmother who retired to spend more time with her family in South Australia but a chance meeting with Pauline Hanson in 2016 led to her appointment in the Senator’s office as a policy adviser, a role she’s held ever since.

“South Australia is looking for change, and we have a strong team ready to make it happen at this election. Pauline Hanson’s One Nation is well and truly back in South Australia.

“Our state is facing crises in health and housing. The education system is failing our children, with many young people leaving school deficient in literacy and numeracy. Many South Australians feel disconnected from and ignored by the state government.

“We’re offering a genuine alternative to the major parties in South Australia with an important difference: One Nation will defend the individual rights and freedoms we consider to be essential principles of our democracy, and which have been threatened or restricted by COVID-19 vaccine mandates and harsh pandemic measures. We’ll push for an immediate end to all mandates and restrictions in South Australia, and we’ll back Pauline’s demand for a Royal Commission into the management of the pandemic by Australian governments – Commonwealth, state and territory.”

“There’s been a lot of housing development in the suburbs but infrastructure and services have not kept pace. South Rd is the major transport route in the mainland portion of Mawson and is in serious need of upgrades and maintenance. Communities in the western Fleurieu are struggling with access to basic services.

“Kangaroo Island is a jewel in South Australia’s tourism crown and it’s important transport links are affordable and secure for tourists and island residents and businesses, especially the island’s signature agricultural industries. Reducing those costs is the key to unlocking more of the island’s potential, and to the sustainability of Kangaroo Island communities.

“I’ll be pushing for more efficient and affordable transport links throughout Mawson. It’s time our local infrastructure caught up with the population. This also includes local health infrastructure, and more affordable housing for younger families looking to enter the market.

“Pauline Hanson’s One Nation is seeking the balance of power in state parliament to implement policies for the benefit of all South Australians, and I will seek to leverage this position for the good of people of Mawson. I’m leading a strong team of more than 20 candidates who are aiming to make a real positive difference in South Australia.” 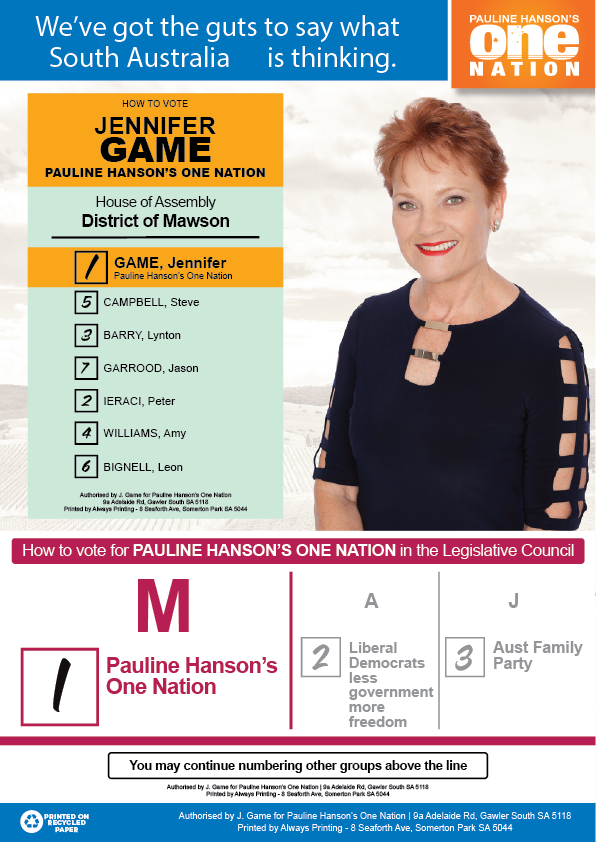