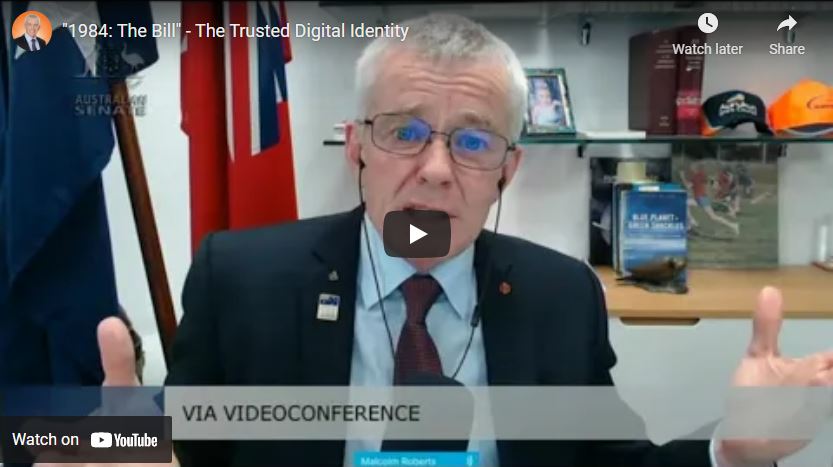 We stand at the divide between a free, personal-enterprise future and a digital surveillance age in which the government sits in the middle of every interaction Australians have with each other and with the world.

As a servant to the people of Queensland and Australia, tonight I draw attention to a new government bill, the Trusted Digital Identity Bill 2021. This is no time for subtlety. The Trusted Digital Identity Bill represents a watershed moment in Australian history. We stand at the divide between a free, personal-enterprise future and a digital surveillance age in which the government sits in the middle of every interaction Australians have with each other and with the world. It achieves this in the same way China does, creating a digital identity that forms a central part of a person’s life. Call it a licence to live.

This bill removes the privacy protection currently preventing this exploitation and allows the government to keep one massive data file with everything the government knows about you and to sell that file to private companies overseas. Those companies can add your private sector data to build up a complete digital record of every Australian—everything: medical, shopping, whom we associate with, social security, veterans services, travel, web viewing, employment, our social media comments. Everything will go on the record and be available to any large corporation that can pay for access. We will each have to pay to access our medical records from that corporation. In Morrison-Joyce news speak, it’s a ‘human-centric digital identity’—sounds great, doesn’t it!

This has frightening ramifications for government and corporate control of everyday Australians. Policy documents attached to this bill promote digital identity as a benign housekeeping bill to fix antiquated and incomplete government databases ‘to save a few minutes filling out that government form’, they say. ‘This will reinvigorate the economy after COVID,’ they say. What the economy really needs is for the government to get the hell out of the way and let Australians lift ourselves up through our own hard work and enterprise—remove vaccine passports or, as I call them, digital prisons; ditch QR codes; stop spreading fear; and let the Australian spirit do the rest.

One Nation believes in technological advancements and in streamlining services. We would love to see a bill come forward to clean up the government’s databases and improve the online experience of Australians trying to access our own data. This is not what the digital identity bill does. Digital identity will do nothing to fix the government’s IT, yet it creates a crown-jewel scenario for hackers to steal not just one set of government data but, rather, personalised treasure troves. Far from safe, the Australian government’s is one of the most hacked databases in the world. This year, medical records became a highly sought after target. If you want to know the direction in which global policy is headed, watch what the hackers are trying to steal.

Another concern is vaccination. Digital identity links medical history with consumer purchases. What’s to stop a government locking out an un-injected person from the economy, as more than one state premier already threatens? It is a social credit system. We should not have to ask these questions, because the power should not exist. Digital identity represents the cornerstone in a larger World Economic Forum and United Nations campaign to implement a global digital identity system.

When they talk about us having less, or living sustainably, or living in a closed-loop economy, what they mean is: we will have less—a lot less—so that billionaires can have more. It’s this principle that informed the Liberal Party’s billion-dollar Digital Economy Strategy 2030 which is reliant on the Trusted Digital Identity Bill. Indeed, the bulk of the supporting commentary around digital identity and the Digital Economy Strategy 2030 obsesses about how the government will be able to manage Australia’s economy onto a so-called sustainable path—a UN path.

For a glimpse into this future, we need only look at the food menus on display at the UN climate summit that the Prime Minister attended earlier this month. Each dish listed its carbon footprint, with a United Nations pledge to reduce the carbon footprint of every meal consumed across the world, including ours, every day. What happens when a government, obsessed with pursuing digital net-zero policies, decides to encourage people to reduce the carbon footprint of our food choices? We already know the UN is pushing vegetarianism and limiting red meat consumption to one mouthful per person per day.

The level of control this legislation provides to the UN is frightening. Instead of allowing businesses to seek out and explore natural market forces and people’s needs, digital identity is a tool to introduce a controlled economy under international direction, where implementing something like net zero can be mandated individually.

One Nation rejects providing more power to unelected, unrepresentative, unaccountable UN bureaucrats to control everyday Australians in what we can eat, where we can travel, how much water and power we can use, under the threat of being shut off from the ability to feed, clothe and house ourselves.

It’s evident that this policy robs businesses of control over their own future. The government will dictate each and every business’s future interactions with customers and suppliers. Small and medium businesses will have to contend with a massive technology overhead and be forced into an unfair David-versus-Goliath fight against large, incredibly well-informed businesses that are in the globalist information-sharing club. More Australian businesses will fall to foreign multinationals.

Digital identity is the end of personal privacy, anonymity, confidentiality, sovereignty and choice. Despite the bill repeatedly insisting that it offers a voluntary service to make life easier, it’s clear from the full documentation that digital identity will be made compulsory in the same way that vaccine mandates are now.

With this bill, once again, Prime Minister Morrison is trying to ban cash. One Nation was successful in striking the government’s cash-ban bill from the Senate Notice Paper last year, after public outrage. Cashless payments are popular, but the complete loss of cash opens up an entirely different conversation. Cash is a safeguard. When we have cash, we have purchasing power. A digital identity, though, could easily limit our individual purchases based on government or corporate policy. So, under this bill, cash has to go and, under this legislation, cash will go.

Australian banks have already voiced their interest in the Trusted Digital Identity Framework, saying it will allow them to create a rich view of their customers. Most people do not want banking institutions creating rich data maps of their personal and private information. This bill will allow banks to micromanage our spending in the name of whatever social justice cause banks are promoting. The design of the new payment platform that the Reserve Bank of Australia introduced in 2018 and forced on all Australian banks, allows for the addition of a digital identity. In fact, the basic architecture of the new payment platform was designed for a digital identity. Under the new payment platform, every transaction, every retail sale, interbank transfer, pay, online sale, all come through one central server. This allows the digital identity of each party to be checked and approved before the payment is finalised. Just how long have the World Economic Forum and the UN been planning this? For decades.

In China, a person’s phone controls their lives. The same thing has happened in Australia during COVID. Without a phone to prove our identity and to cough up medical data, citizens are excluded from society. The need to carry a phone at all times—charged and ready to offer their digital identity to buy something as simple as a cup of coffee—can be replaced with a wearable or an implantable chip. I can’t wait to see how they sell that! All forced at the start of a social credit system.

The Trusted Digital Identity Bill makes a wild claim that it will solve online fraud and protect businesses and customers. The government even put ‘trusted’ in the title, so it must be true! Anyone with any experience in online fraud knows this system will not solve fraud; it will likely make it worse.

The reason we have a Constitution is to enforce absolute boundaries to stop politicians taking liberties with our liberties. The behaviour of politicians during COVID has shown everyone how quick many politicians and bureaucrats were to abuse rights and to punish and coerce citizens into undergoing untested and unproven medical procedures. This bill will give premiers and the Prime Minister the power to take such action at any time. What a terrifying prospect! For this government, once the public understand how much we’re going to lose under the global reset, oppression becomes essential. This bill becomes the framework for that oppression. The Trusted Digital Identity Bill is a global surveillance and control mechanism that profit-hungry corporations and power-mad politicians drafted and crafted. It aims to introduce the total-control economy where citizens own nothing and have no freedom and no choices.

One Nation opposes this inhuman dystopian future that the United Nations promotes as the great reset, and we condemn this parliament for signing on to it. The only way to stop this monstrous plan is, at the next election, to throw out the globalist cheer squad—Liberal, Labor, Nationals and Greens parties—and develop a potent One Nation representation to hold government accountable and return parliament to serving the people of Australia.